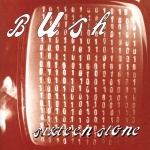 Gavin wrote Glycerine in reference to his relationship at the time with model Jasmine Lewis. The two separated after a five-year relationship, citing busy schedules and long periods of time apart as catalysts for the breakup. Rossdale met his next girlfriend in 1996 when No Doubt opened for Bush. Gavin Rossdale and Gwen Stefani married in 2002

[Verse 1] It must be your skin, I'm sinking in It must be for real, 'cause now I can feel And I didn't mind, It's not my kind It's not my time to wonder why Everything gone white, everything's grey Now you're here, now you're away I don't want this, remember that I'll never forget where you're at

[Verse 2] I'm never alone, I'm alone all the time Are you at one? Or do you lie? We live in a wheel where everyone steals But when we rise, it's like strawberry fields I treated you bad, you bruise my face Couldn't love you more, you've got a beautiful taste

[Verse 3] I needed you more, you wanted us less I could not kiss, just regress It might just be clear, simple and plain Well that's just fine, that's just one of my names